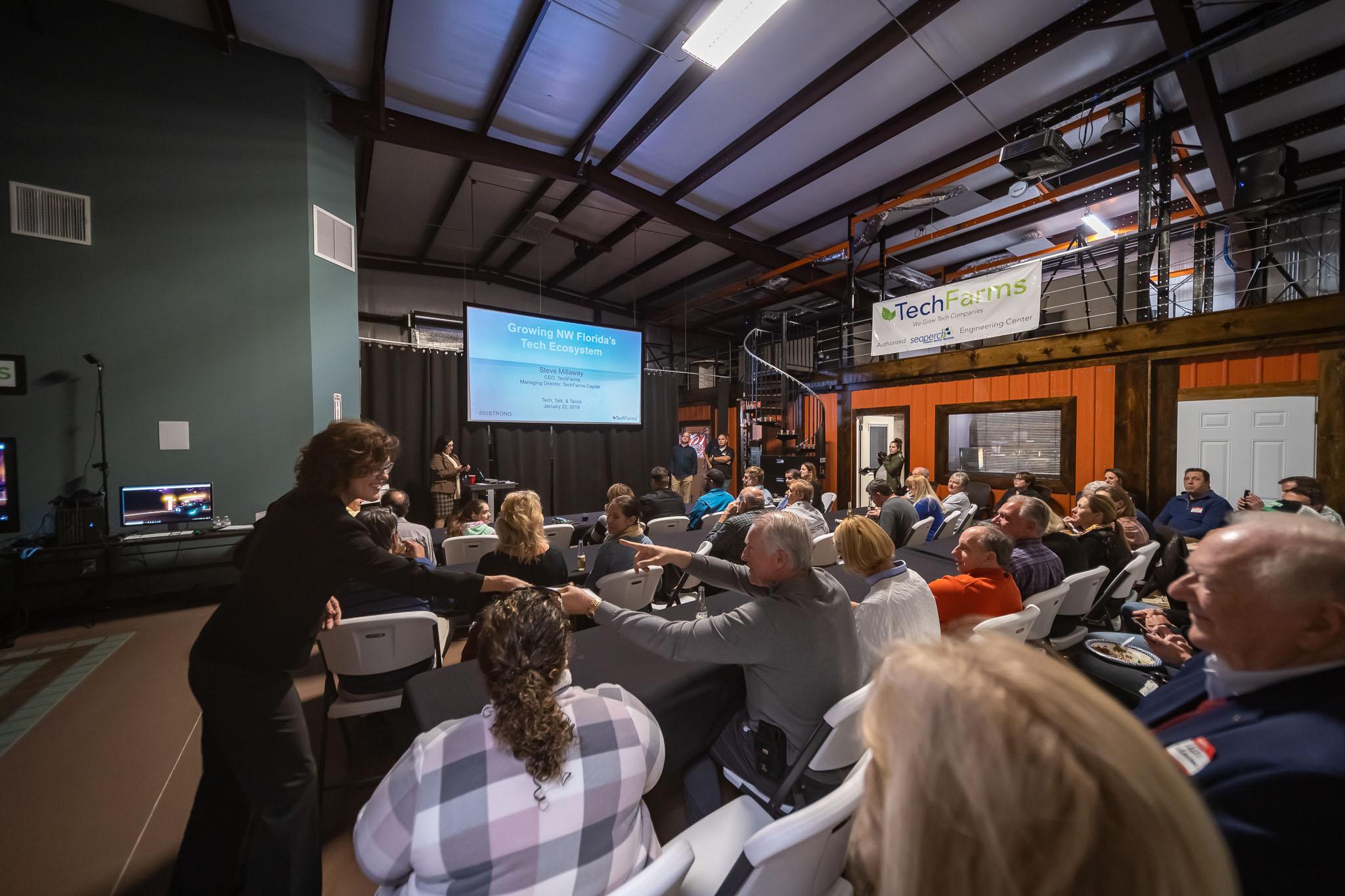 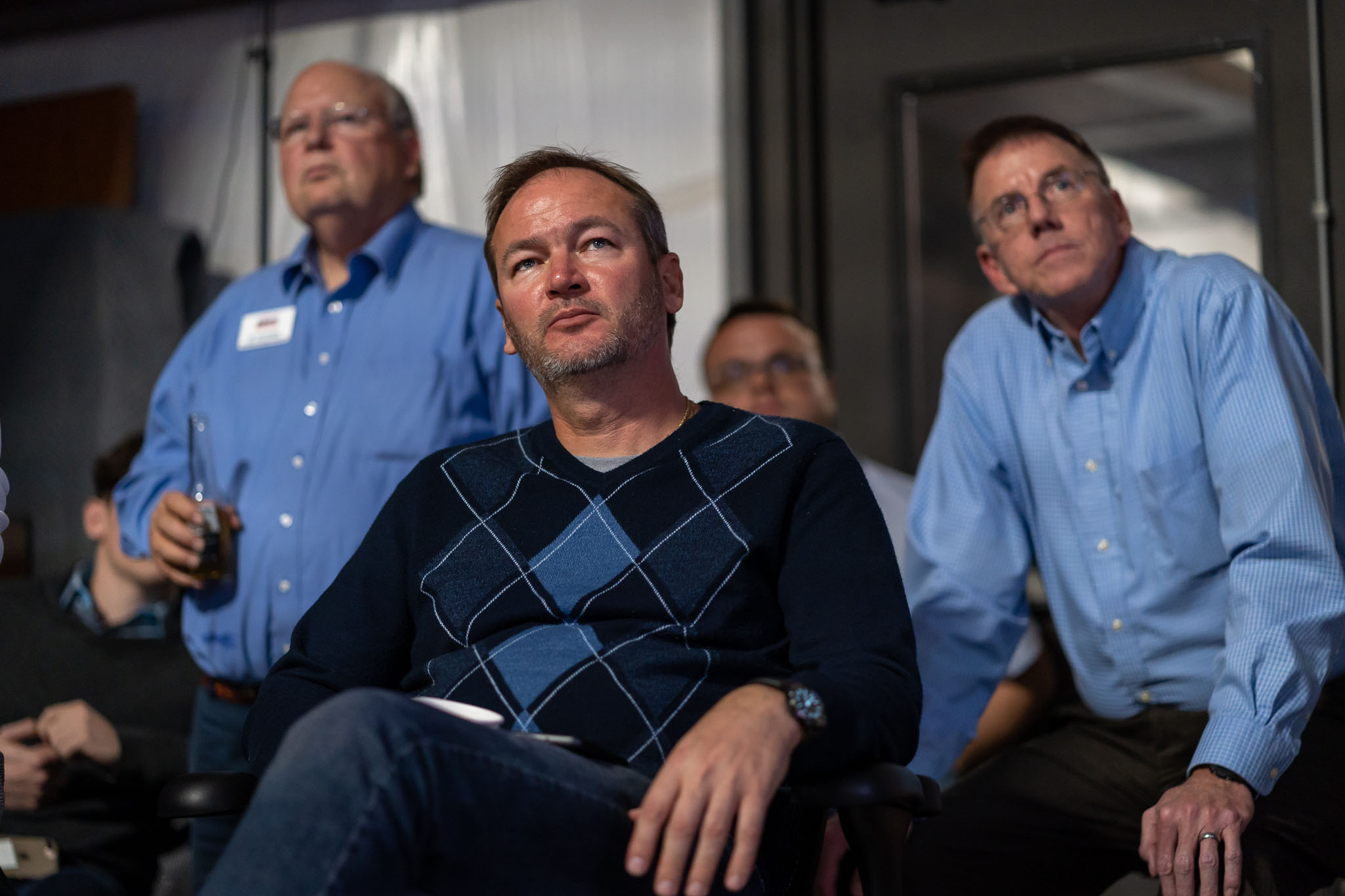 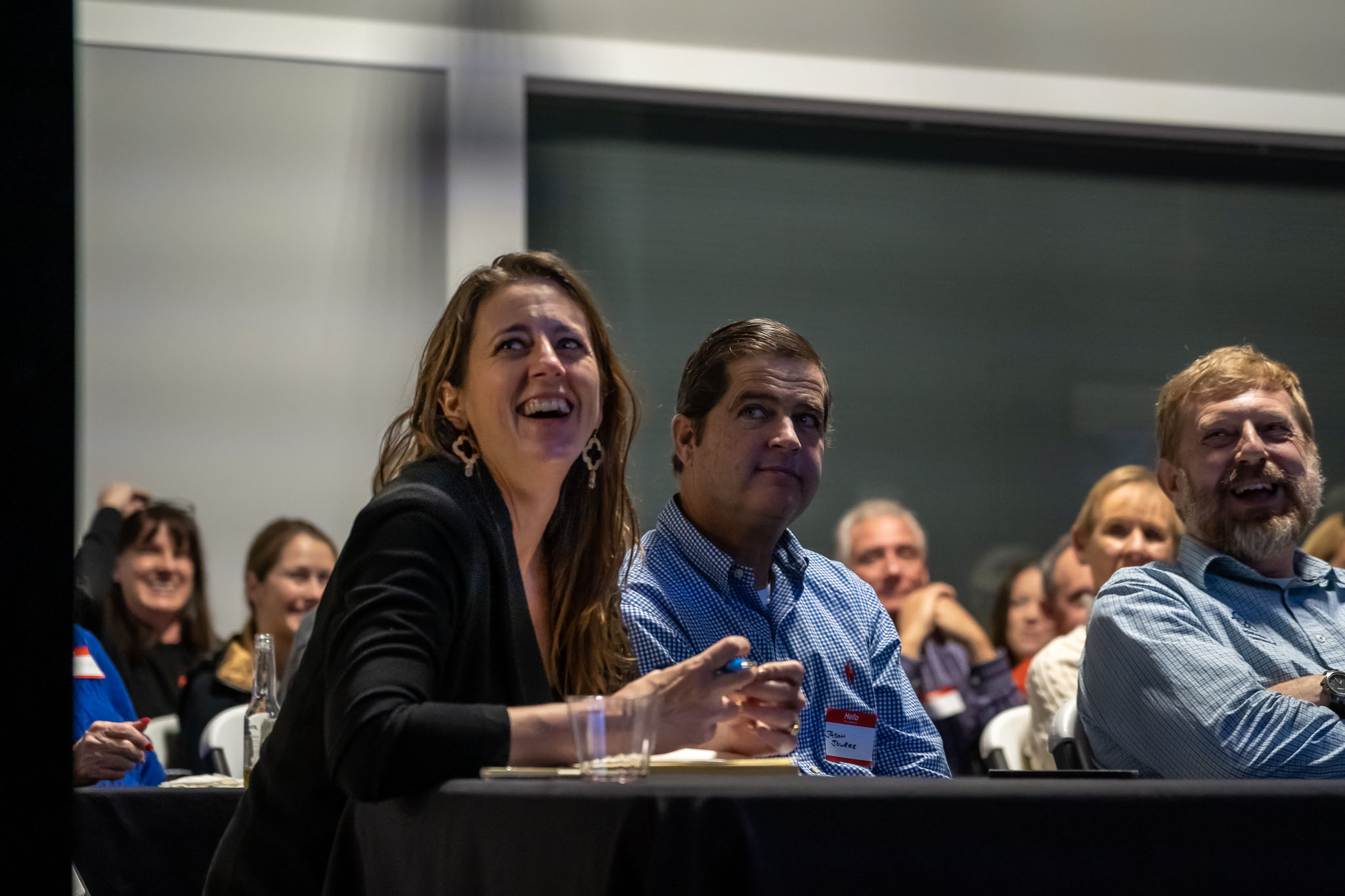 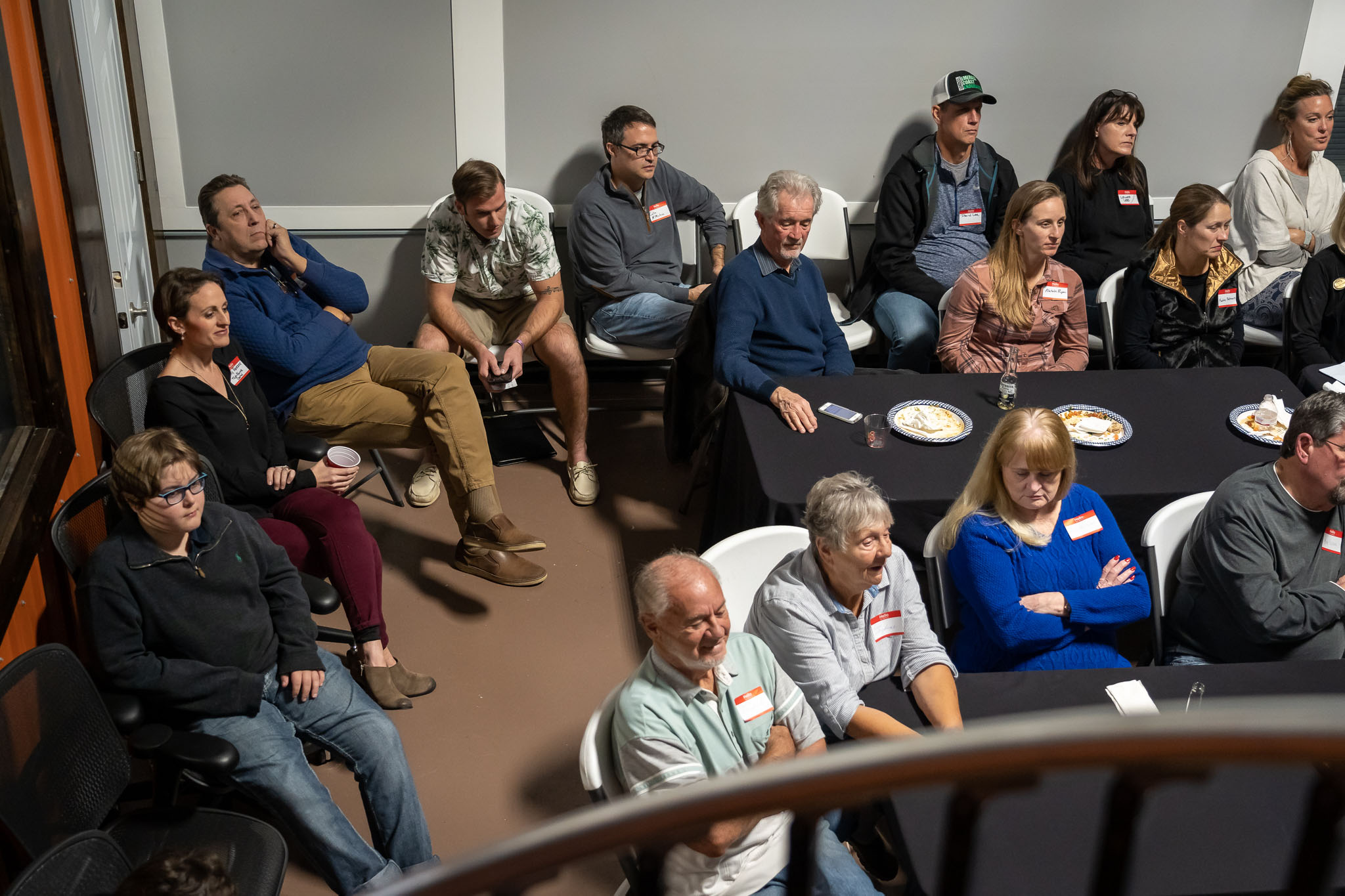 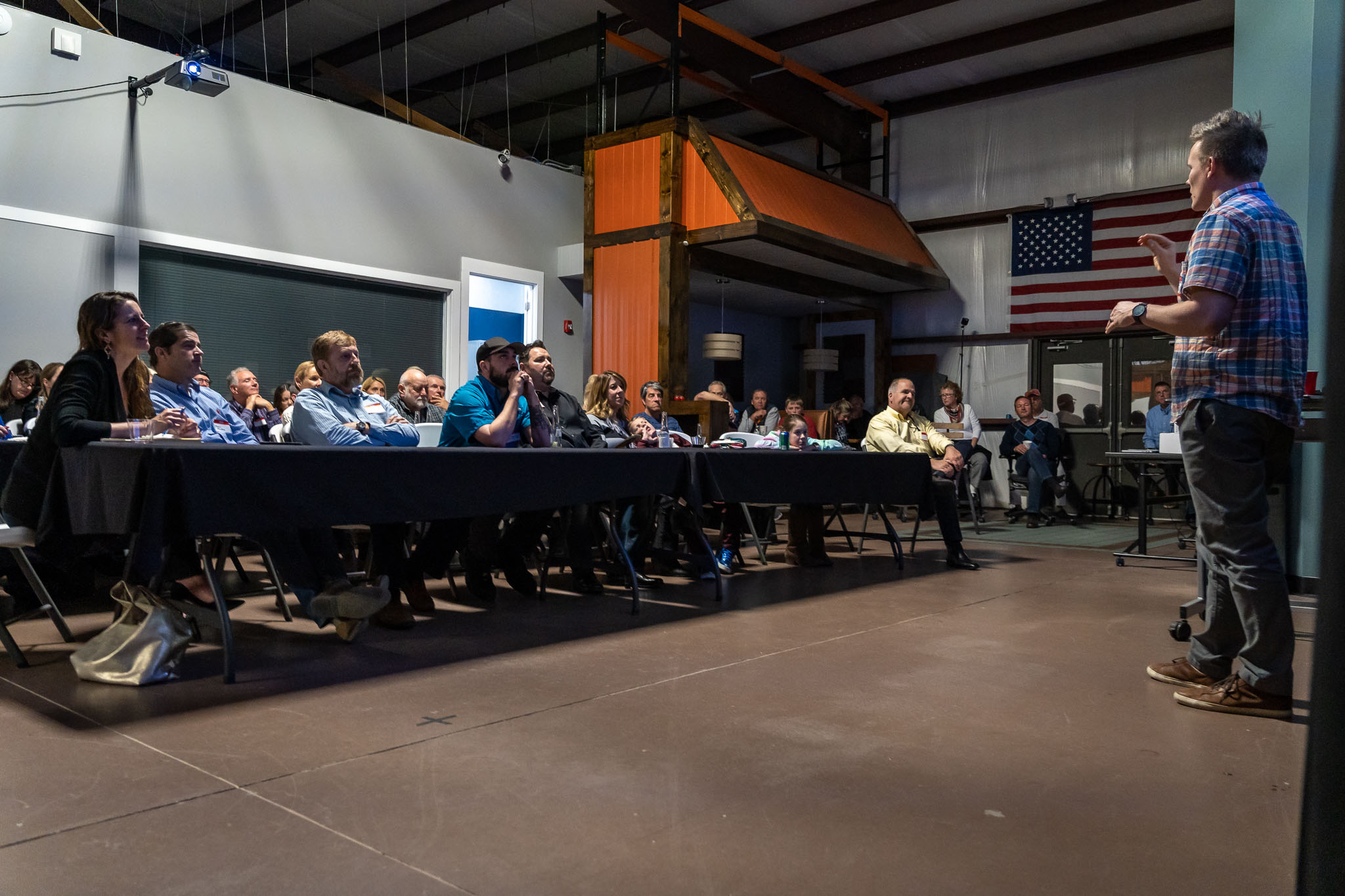 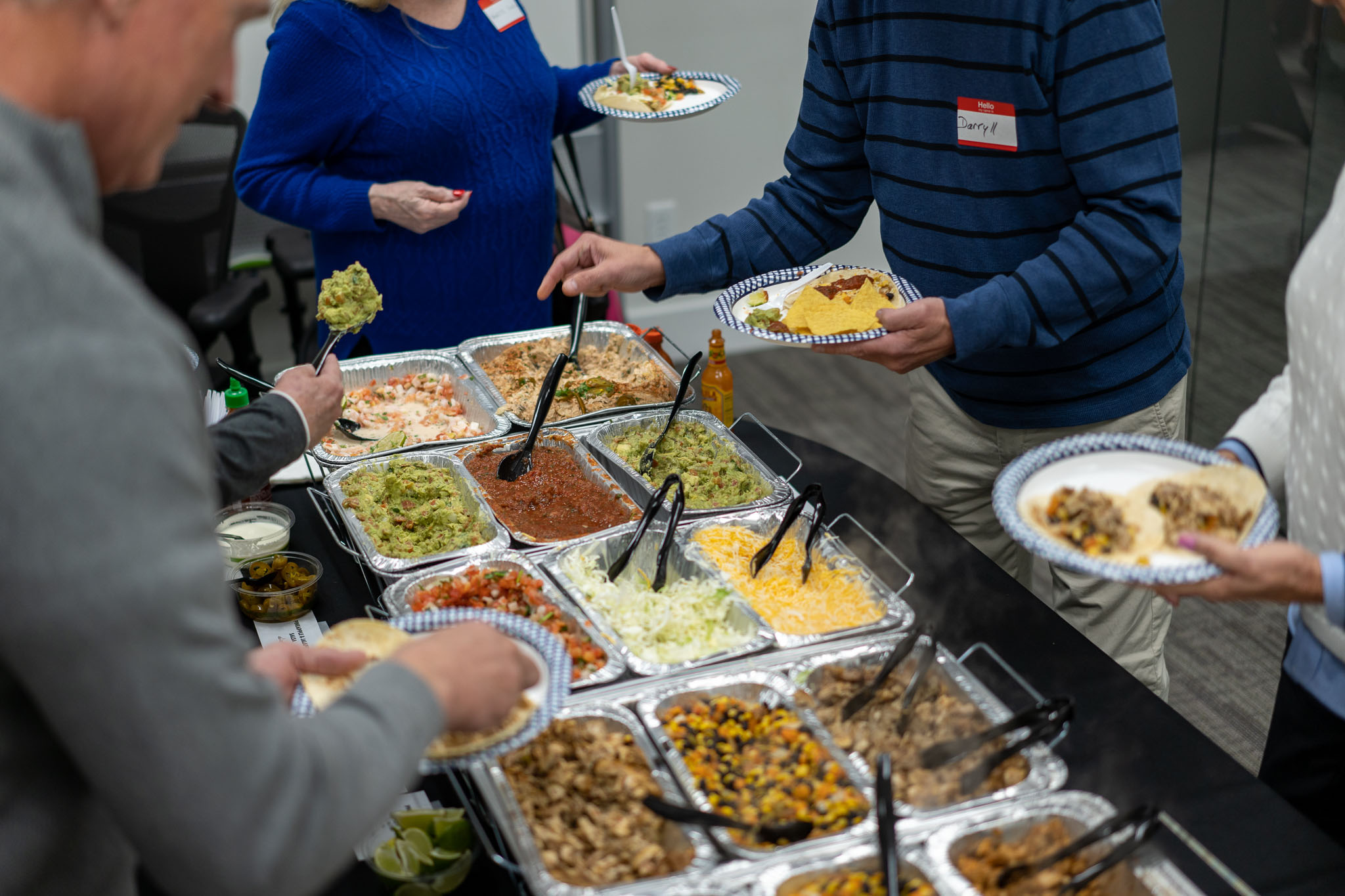 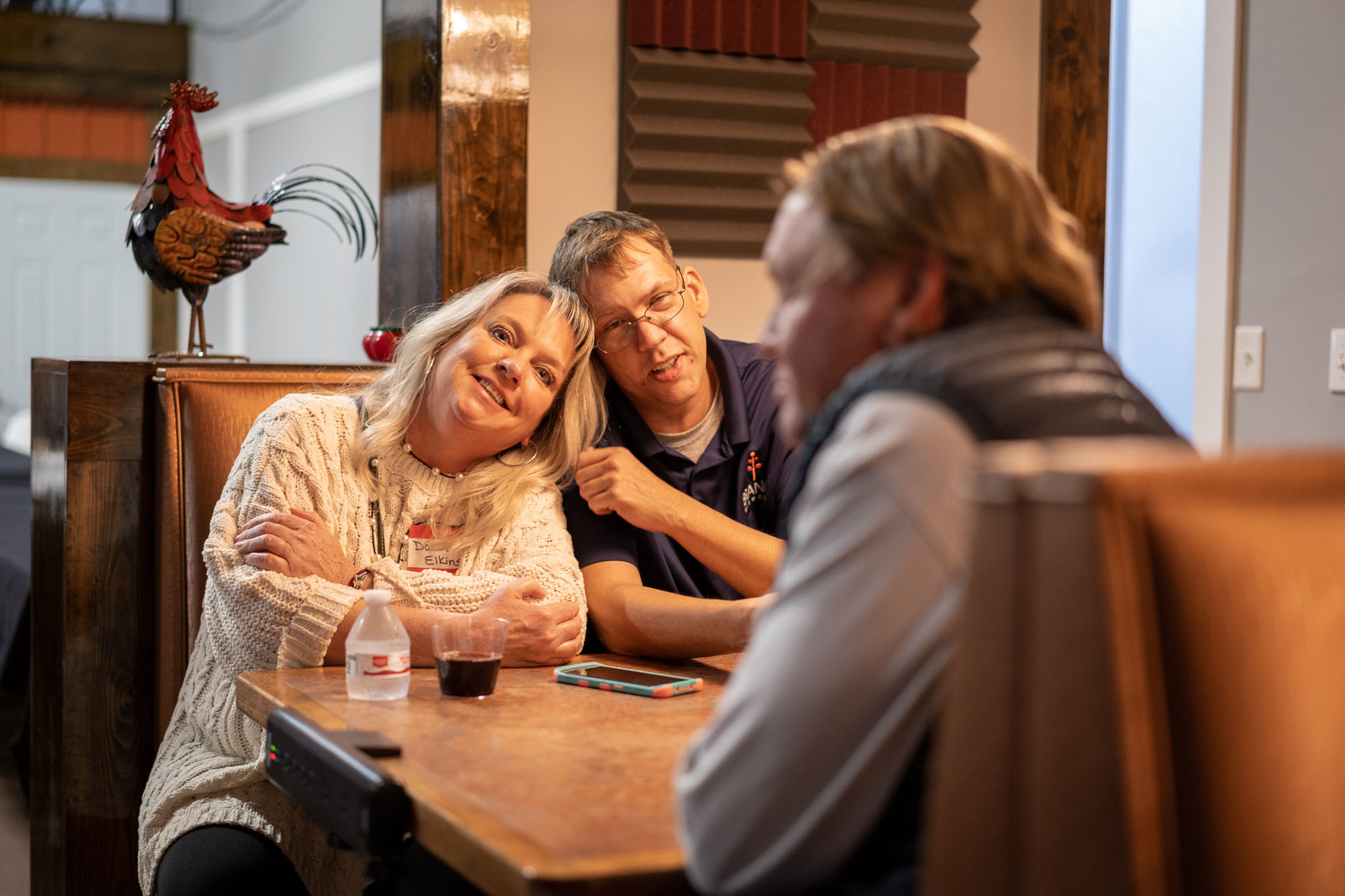 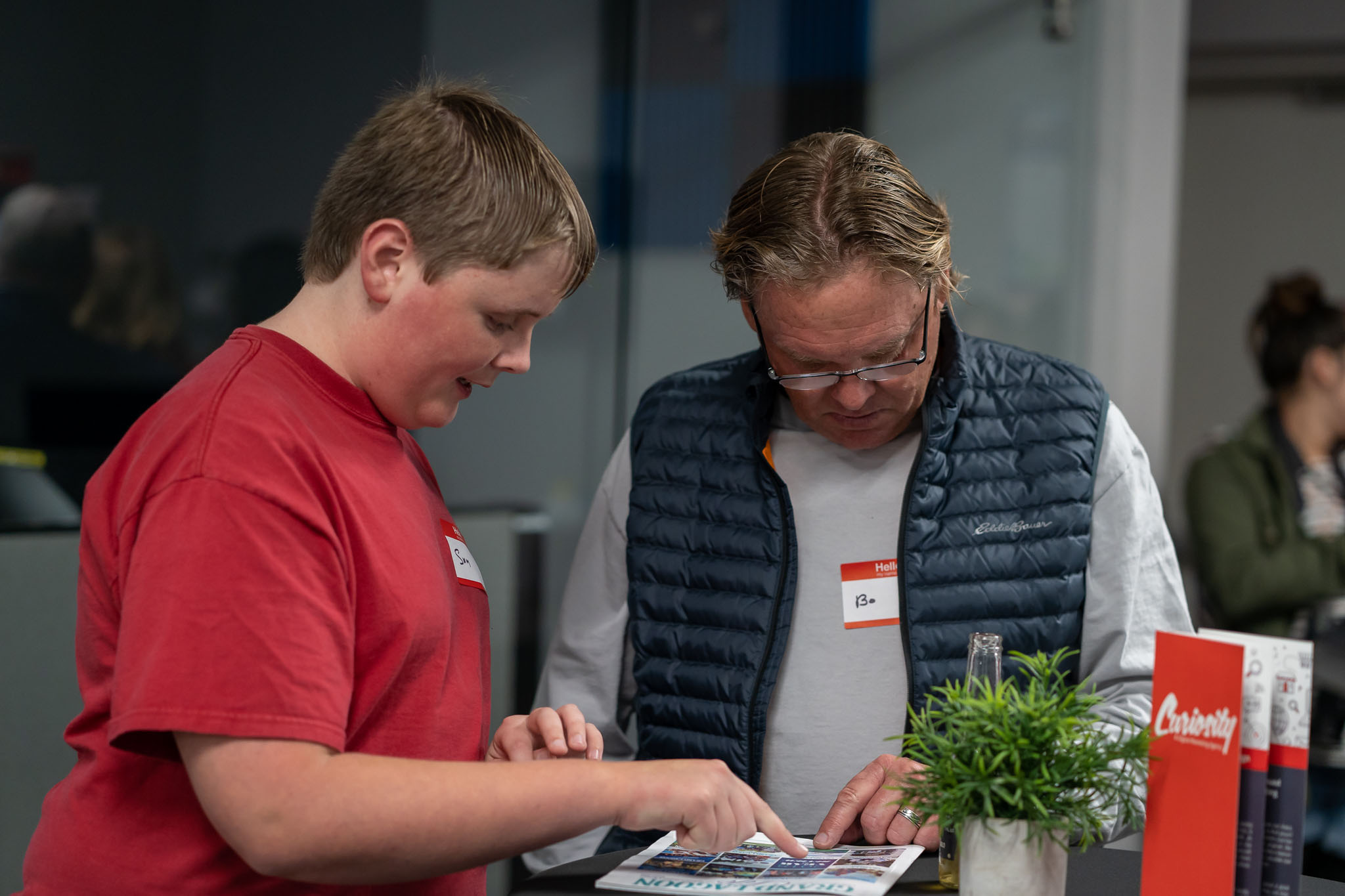 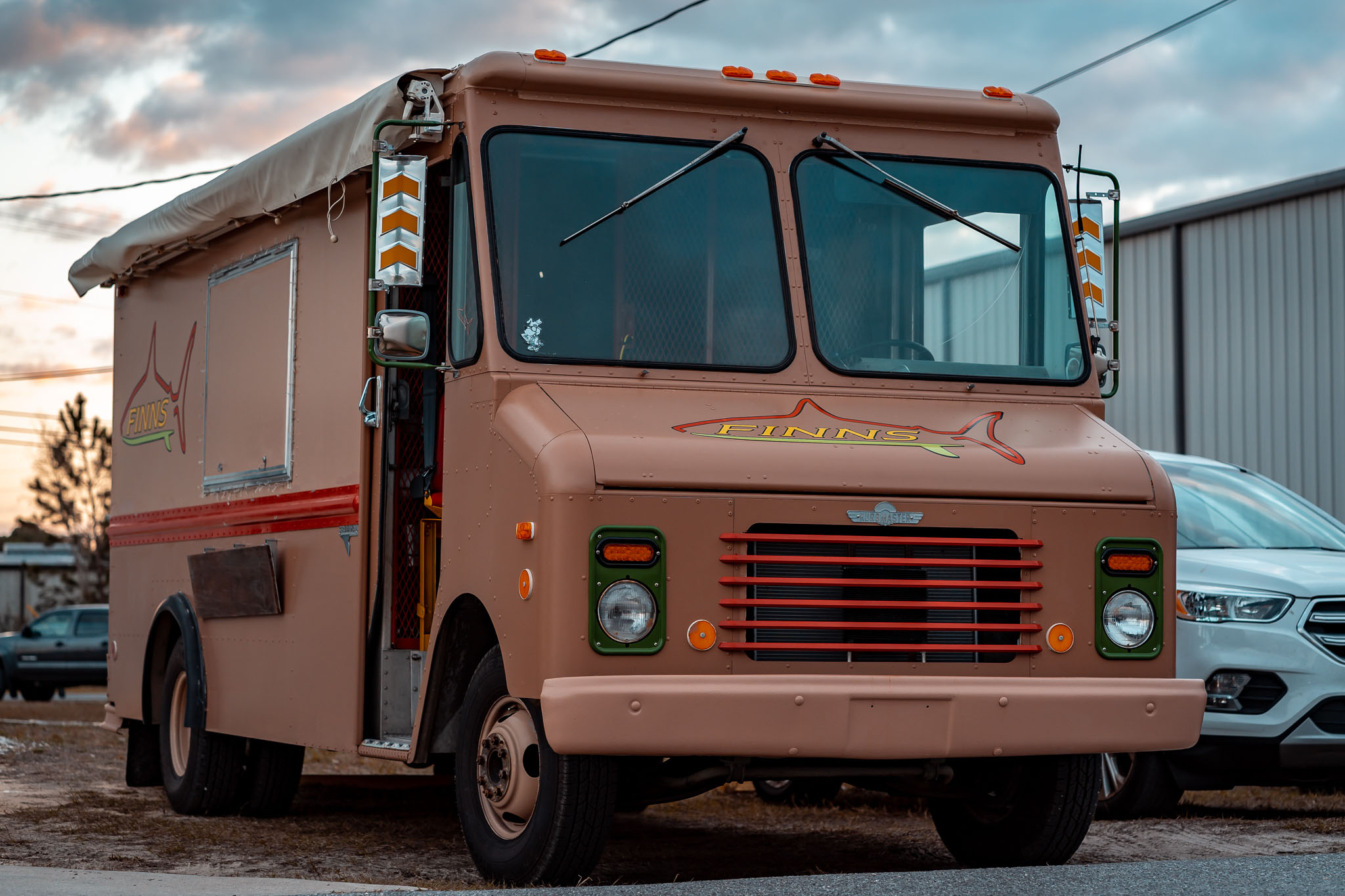 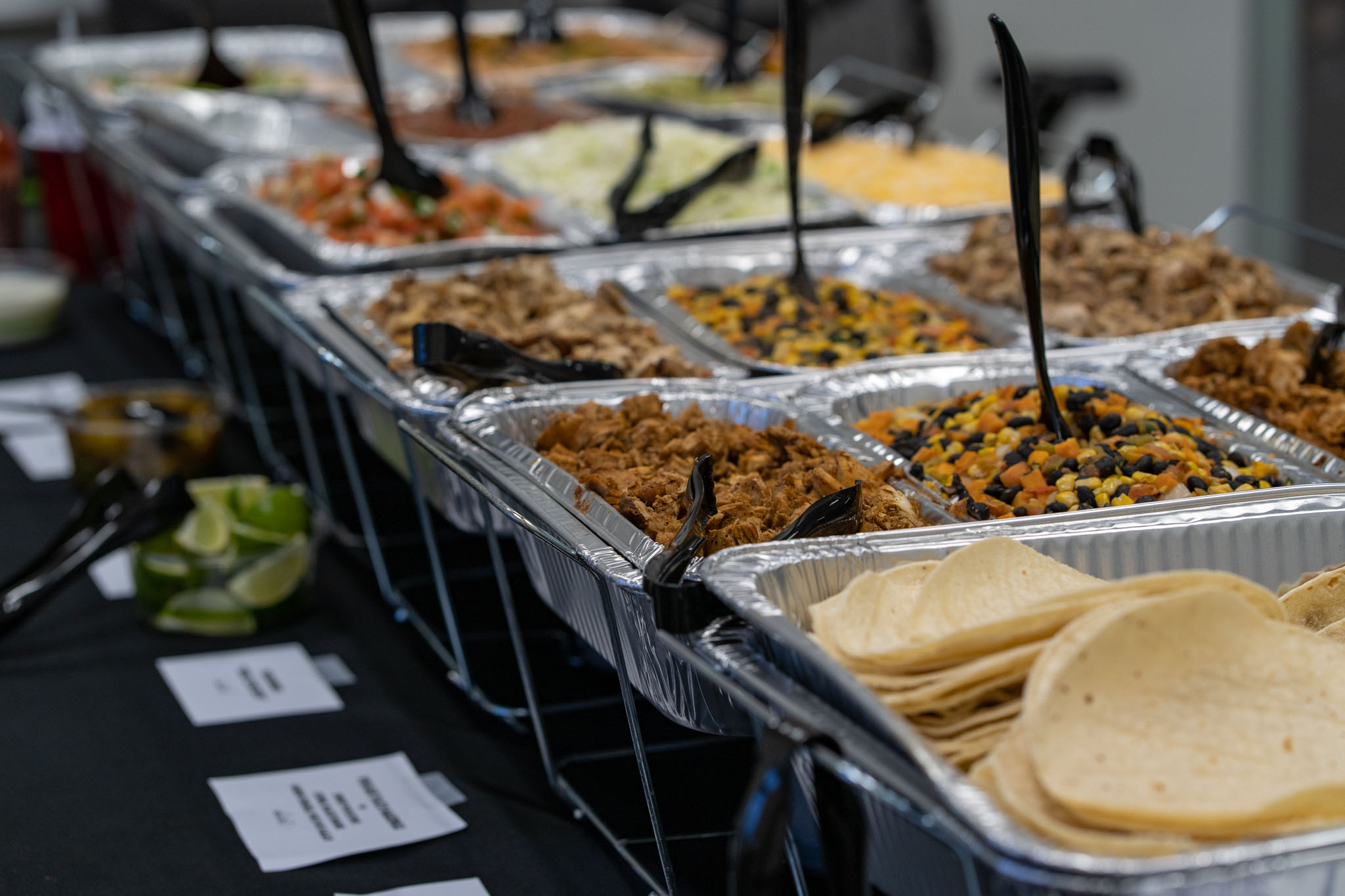 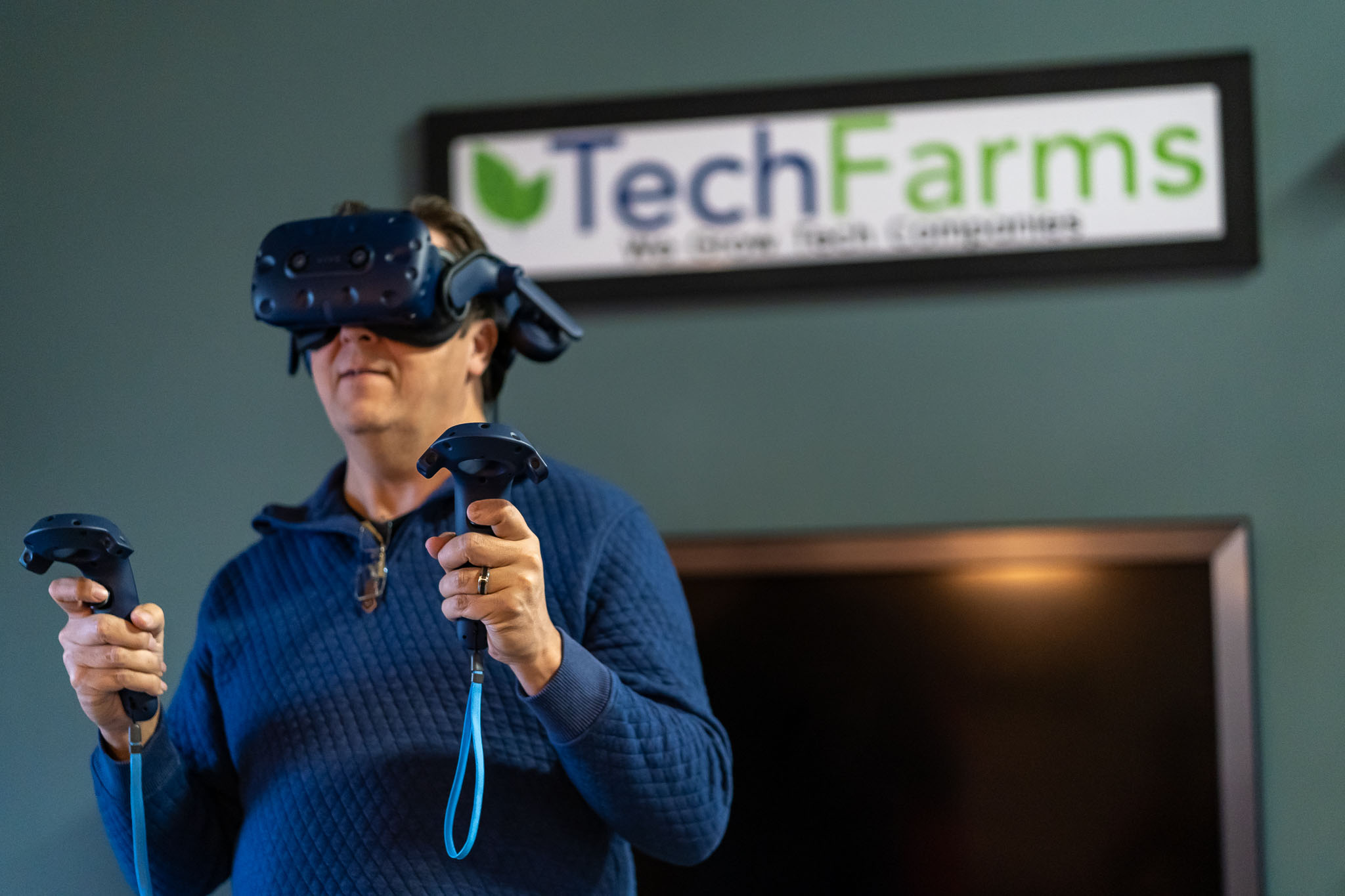 As March nears its end, residents of Bay and surrounding counties are still coping with the massive destruction Hurricane Michael wrought more than five months ago. In just four hours, the storm changed many people’s lives forever. Many of our friends and family members are still displaced; places that held significant memories of our pasts are gone; and the home repairs, debris hauling, and construction continue with no end in sight. It’s no wonder that many are searching for ways to put their lives back together and get back to normal.

With this in mind, the staff of TechFarms and Grand Lagoon Life magazine teamed up to bring a little normalcy back to Bay County — with the help of tacos.

Tech, Talk, & Tacos (TT&T), an open-door event at TechFarms, brought the local community together to discuss the importance of spreading and rebuilding our technology and entrepreneurial ecosystem. The event began with a taco feast catered by local favorite Finn’s Island Style Grub, followed by presentations by TechFarms staff, members, guest speakers, and entrepreneurs.

The event offered plenty of glimpses at new technology — from smaller endoscopes to groundbreaking apps to personal flying devices. It also promoted connections within the community, between entrepreneurs and funding, and even between native palm trees and coconut lovers.

Another recurring theme at TT&T was the need to engage local youth in STEM subjects and careers. TechFarms’ Steve Millaway pointed out that China produces eight times more STEM graduates than the U.S. each year, putting it on track to surpass the U.S. as the world’s technology leader. Hive Technologies’ Richard Hurst offered autonomous vehicle projects as one way to engage students and help change the tide.

For those of you who couldn’t attend, don’t sweat it – we’ve got you covered!

Below is a list of the speakers and a brief review of their presentations.

After a warm welcome, Marta Thorpe, publisher and editor of Grand Lagoon Life magazine, discussed the magazine’s brand and the direction it is taking to help strengthen our local community. The magazine, she said, captures the essence, vitality and business climate of one of Panama City Beach's oldest communities, Grand Lagoon and the Thomas Drive Corridor. The monthly magazine is mailed directly to 1,100-plus homes in the area.

Thorpe’s approach is different from other local and regional magazines. The publication is deeply connected in the community: “We are members of the Grand Lagoon Coalition, Panama City Beach Chamber of Commerce, Bay Point Yacht Club, Bay Point Women’s Club, and work closely with the Bay Point Community Association,” she said. Grand Lagoon Life also continually hosts free local events like Neighbors Night Out and is always seeking innovative ways to educate, inspire, and connect its readers.

We thank Marta for her boundless energy and her dedication to helping to make our local community even better.

Visit Facebook/GrandLagoonLife for more information and for a glimpse of life in Grand Lagoon.

TechFarms was founded with one goal in mind, CEO Steve Millaway said at TT&T: to help grow Northwest Florida’s private-sector tech economy. By growing the tech ecosystem, the company —Bay County’s only incubator and coworking space — is helping to diversify our local economy, create more high paying jobs, and help create the workforce necessary to attract larger firms to our region.

Millaway also spoke about how significant technology is in our daily lives and why the lack of funds for area startups is a major concern for our community. When innovative startups can’t find funding, he said, they either fail or leave our region in search of capital elsewhere. TechFarms Capital, of which Millaway is a managing director, aims to help fund these startups and keep them in our region so they can create jobs while helping to diversify our regional economy.

Millaway introduced Kelly Reeser as TechFarms Capital’s second managing director. Reeser, formally the Director of Entrepreneurial Development for FloridaWest Economic Development Alliance in Pensacola, also ran Pensacola’s most successful incubator, Co:Lab. Reeser spoke of her 8-years experience as the Director of Co:Lab and the strong need for capital for startups throughout Northwest Florida. Reeser will remain in Pensacola where she is still actively engaged with the local entrepreneurial community.

Richard Hurst, CEO of Hive Technologies, an engineer at Naval Surface Warfare Center Panama City, and an adjunct professor at Florida State University Panama City, spoke about just what AI is — and what it isn’t. There’s a lot of confusion and hype surrounding artificial intelligence these days, but Hurst said its potential for the future is huge. As an example, he briefly discussed the many issues facing honeybee populations. To help address their decline, Hive Technologies has developed a beehive sensor that is inserted into the hive and records parameters such as sound, temperature, and humidity. This data is then given to researchers and scientists who are studying the reasons for the honeybees’ decline. AI, Hurst explained, can be used to further interpret the mountains of data collected by those sensors and possibly help derive some meaningful conclusions.

Brent Skipper is founder and CEO of Headhunter Inc., which is taking on a universal problem: the difficulty of finding appropriate job candidates to interview. Based solely on a resume, hiring managers can’t learn much about an applicant’s “soft skills” — their personalities, communication skills, how they interact with people — a big problem when those skills are often just as important as hard skills like talent and experience. So, he asked, “Why not discover this data within the first step of the hiring process?”

Headhunter’s solution is a video-based mobile and web app that allows for more personal communication before you ever reach the interview process. Hiring managers make a short video introducing themselves and their company, give an overview of the job requirements, and provide a brief list of questions they would like the applicants to answer. To respond to the job opening, the applicant must record a short video of themselves and answer the employer’s questions.

“How many times have you interviewed someone and realized within the first few minutes that they’re not the right person for the job?” Skipper asked, saying Headhunter can help both applicants and employers identify a bad fit without the need for time and travel. The app — available today — is free to applicants, and employers pay for the video ads they post. Skipper said Headhunter already is generating strong interest — including from TechFarms, which plans to use the app itself to quickly and efficiently match candidates to jobs.

Bryan Joy, CEO of Gfaith Media, insists that Christians worldwide should have a secure online platform that allows them to connect, share information, and support each other. At TT&T, he presented his solution: the Gfaith app.

Plenty of social media platforms exist, but there are growing issues with censorship and privacy, Joy said, to the point that many Christians are no longer comfortable using their services. Coupled with the selling of users’ personal data and continual data breaches, Joy said it’s no wonder that many people are in search of a more secure, Christian-friendly platform.

Gfaith, a social media app specifically for Christians, is in final stages of development and will be both Android and iOS compatible. “The Gfaith platform will be the premier mobile app for our heroes and people of faith to communicate globally,” said Joy, a Marine Corps veteran. “It will offer unprecedented access to local and global resources, live and recorded events, and issue-based support groups.”

The Gfaith platform will sell limited advertising to fund its service and has a corporate commitment to return 70 percent of its profits to support our nation’s military heroes and veterans.

Reach3D’s patented technology takes endoscopic visualization systems to a new level and is less invasive than the current standard — the company’s single-light-path 3D endoscopes are one-quarter the size of current competitors. “The company is positioned as easier to use, with a broader surgical capability, and lower cost of ownership compared to other 3D solutions,” Parker said. “The Da Vinci Surgical Robot tells the story of the importance of 3D in surgery, but we’re making 3D more affordable and available to a broader surgical audience.”

While serving his country in Afghanistan, Alex Hill found a book called “Think and Grow Rich,” which led him to wonder, “What else could be out there for me?” he said at TT&T. It turned out the answer was coconuts.

Soon after he left the Army, Hill saw a Key West vendor selling green coconut water as fast as he could cut the coconuts open and place a straw in them. He talked to the vendor and learned that coconuts, which grow well in South Florida, are 100 percent natural with lots of vitamins and minerals. He became fascinated with the notion of selling coconuts in Northwest Florida and beyond. After researching the coconut industry in considerable detail, he launched Florida Coconuts LLC and secured a source of green coconuts from a plantation in South Florida.

Jeff Elkins, the resident “mad scientist” of TechFarms, has dreamed up ways to make humans fly, swim, and light up the world like never before. At TT&T, Elkins and fellow entrepreneur Mariah Cain gave the local community an exclusive viewing of some of their seemingly sci-fi projects — the Hydroflight F4 Wireless remote controller for flyboarding; Thruster Boots, which allow for tetherless propulsion through the water; waterproof LED light suits, currently on popular display in SeaWorld acts; and the AirBoard.

Thruster Boots, a follow-up to the flyboarding industry, are motorized boots that allow hands-free propulsion underwater at speeds approaching 5 mph. Powered by lithium batteries, divers have up to an hour of “flight time,” with their speed regulated by a toe switch and foot movement. The boots remain in the developmental stages.

But Elkins’ latest innovation, the AirBoard, was the star of the show. The AirBoard is among the world’s first battery-powered, vertical takeoff and landing aircrafts. Elkins said the current version, AirBoard 2.0, will feature longer battery life, improved safety features, and other improvements that allow the pilot —Cain — to have greater control.

Elkins and Cain formed a new startup, Dragonair Aviation Inc., and entered their concept for AirBoard 2.0 into Boeing’s prestigious GoFly Prize contest. Amazingly, they’re among 5 finalists out of over 800 participating companies worldwide - the winner of which will receive a $1 million prize for developing and demonstrating the best personal flying machine.

Sean Hoffman, CEO and Cross-Platform Mobile Application Architect of Bob–Alliance, LLC, AKA “The VR Party Guy”, has closely followed Virtual Reality (VR) since the posting of the Oculus Rift on Kickstarter way back in 2012. Hoffman, a computer science graduate from UWF, believes that not only is VR the future, but it will change our lives just as much as mobile technology has. His dream is to bring the VR experience to as many people as possible, and to develop the world’s first VR Arcade. One of his many pit stops on his journey just so happened to be during the TT&T event.

Hoffman gave his presentation and entertained the local community by allowing guests to interact with one of the most cutting edge VR systems available – the VIVE Pro. Guests strapped on the VIVE Pro headset and were immersed in an unbelievably realistic world – an artificial environment complete with the sense of touch, sight, sound, and even a sense of smell while wearing a headset and gloves. The system delivers immersion unlike any other: true-to-life precise tracking, ultra-vibrant colors, and uber-realistic sounds create a world that transports you to any scene in split seconds. The overall physically and mentally experience of being in two places at once had many guests leaving the event speechless.