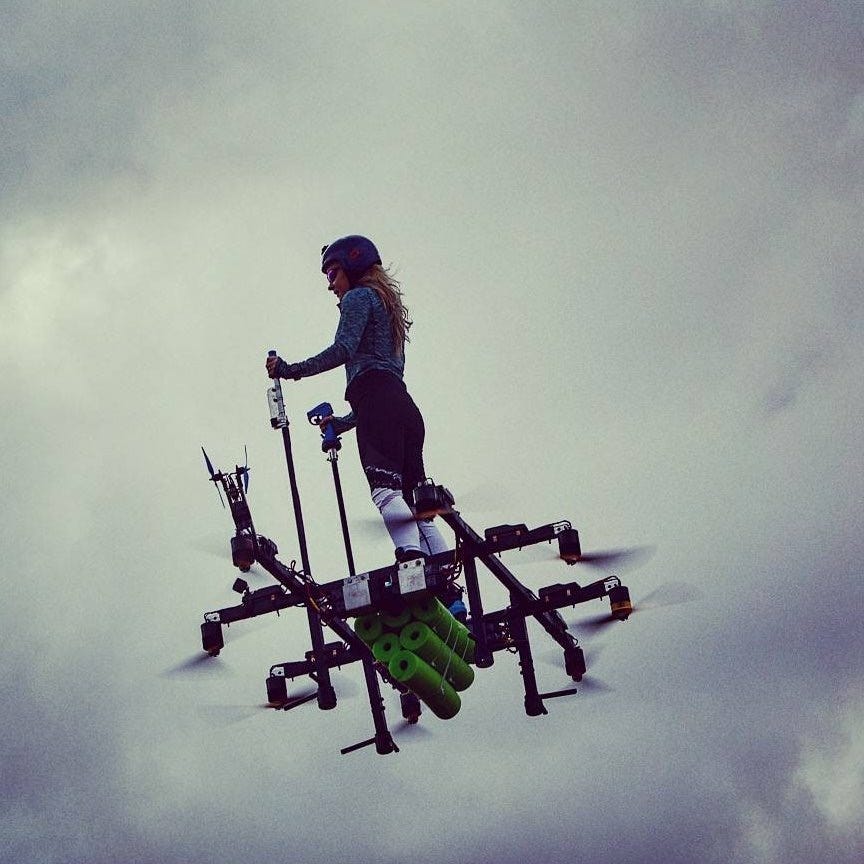 Three years ago, Mariah Cain was teaching extreme water sports to tourists in Fort Lauderdale, Florida, and working part-time as stewardess on yachts.

Now, the 24-year-old is the president and project manager for a new invention she believes will change the world.

“I’m a pilot for an experimental ultralight, fully electric vertical take-off and landing aircraft. That means it lifts straight up and down from any location,” Cain explained. “You basically plug it in like your phone and when the light turns green you can take off and go fly.”

Cain flies in a standing position and controls the Airboard using her body movements to control it.

“Humans have dreamed of flying like birds forever…. but I never dreamed I’d be one of the first women to bring this new style of transportation to the world,” she added.

The FAA is still developing the best way to certify these aircraft. Cain said the Airboard, which is battery powered, allows for easy transportation and doesn’t use fuel.

It also offers a unique advantage for many industries in the future, such as search-and-rescue operations.

“Most small aircraft and helicopters have at least a 15-minute pre-flight before take-off. Since our system checks are done by computers, we can do those pre-flight checks in a fraction of the time,” she told “GMA.” “We plan to integrate all the technology we created while building the Airboard into a multi-copter that can we use for search-and-rescue. Until then, we will use it for sport and entertainment as a means of getting these devices out in front of people and showing safety.”

The invention is competing in an international contest called the “Go Fly Prize” to make human flight a reality by building the world’s first personal flying device for prizes up to $2 million. The personal flying device must be safe, quiet, compact and capable of carrying a single person for a distance of 20 miles without refueling or recharging, according to its rules. Falling in love with flight

As a child, Cain says she imagined gliding through the air and traveling wherever she wanted to go.

“The feeling I had during my dreams is surprisingly close to what it feels like to fly my Airboard now,” weightless, limitless and without the bounds.”

A chance meeting with Jeff Elkins, an inventor/drone pilot who was making LED light suits for SeaWorld trainers, would help make her dream come true. Cain initially wanted Elkins to create an LED suit for her HydroFlight exhibitions, but when he told her he was building a battery-operated air-board that would fly on its own – untethered – she was intrigued.

Cain volunteered to help work on the project, and started commuting 18 hours round-trip to Elkin’s workshop in Panama City on weekends and days off. Then Elkins approached her to start flying it.

“The next thing I knew I was flying in the air,” Cain said. “I fell in love with flight and had to turn it into my life. I had no choice.” Initially Cain could only remain airborne for 30 seconds at a time before the batteries needed recharging. But by July 2017, she was able to fly for a full 7 minutes, 100 feet in the air on the device, which she nicknamed “The Dragon.”

“We always joked it was my dragon,” Cain said. “Jeff tried for so long to get it flying, and once I started flying it was doing things it never did before.”

That month, Cain climbed on the Airboard and lifted off. The video later went viral, racking up 30 million views across social media.

“I did a phenomenal flight over the water,” she recalled. “Huge big turns. I felt like I was on a motorcycle, but it was super peaceful … like sliding on ice. When I landed everyone was amazed.”

Taking on the ‘Go Fly Prize’

In 2018, Cain moved to Panama City to work full-time on the project – and raise much-needed cash for parts. She had heard about an international competition called the “Go Fly Prize,” which awards $1 million to create the best human flying machine.

She said she submitted in the nick of time.

“They had just reopened entries for Phase II and I had just enough time to get signed up,” Cain said. “It felt like fate.”

Partnering with Elkins, Cain immediately registered DragonAir Aviation, Inc, ordered new parts and started collecting extensive testing data to prove they could satisfy the competition guidelines and build an Airboard 2.0 that was reliable and quiet.

Ten days later, they put the finishing touches on their design report just moments before the deadline, she said. The competition included 850 teams from 103 counties. DragonAir was named one of five finalists in Phase II of the challenge, from which they scored $50,000 in prize money, and the opportunity for potential sponsorships.

Now, Cain and her team will work on the the design to ensure that DragonAir can complete a course of six miles going at least 30 mph, perform a touch and go, and hover for a total flight time of 20 minutes before sticking a controlled vertical descent within a landing zone.

“Winning the Go Fly Prize would be such an incredible feat,” she said. “To take our project to that level in front of the world would be amazing for my personal mission. To inspire others to follow their passions and not let anything hold them back.”

Cain is an example of how determination and hard work can lead to success.

“I look at my life every day. How did I get here? I can’t believe I’m doing this,” she continued. “But [I’ve learned] you are absolutely capable of anything and everything you dream of. Anything you envision in your mind you can create in your life.”