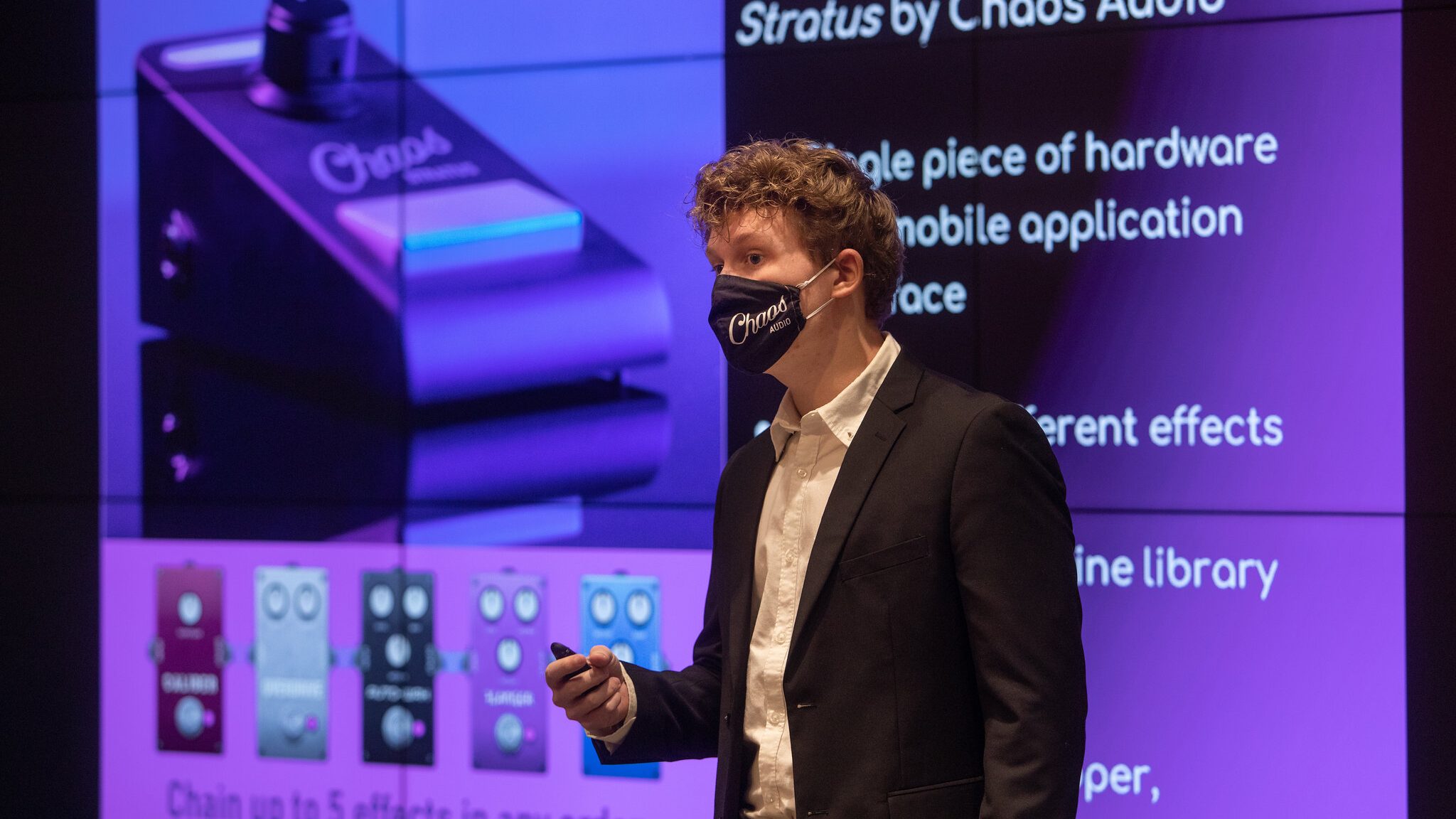 Chaos Audio, the audio tech startup sponsored by the incubation program here at TechFarms, has passed another major milestone as the victors of a high stakes business innovation competition hosted by the Jim Moran College of Entrepreneurship at Florida State University in Tallahassee.

The annual InNOLEvation Challenge had the eight finalists pitch in front of an esteemed panel of judges. Each competitor had to have a strong business model that met various challenge criteria, including problem-solving, team building, and risk assessment. In total, the contest lasted over two semesters and had competing students building out their business model and prototypes piece by piece to narrow the field. In the end, Chaos came out on top.

“We prepared for hours on end perfecting our pitch deck and company documents and it paid off in the end,” said Armis Sunday, head of marketing at Chaos Audio.

The team of engineering students from FSU Panama City has been working on their smart guitar pedal all-in-one effects platform for nearly two years. Their strong work ethic is evident in the multiple functioning prototypes they have designed and built from the ground up. With the aid of local software developer, Teknika, Chaos Audio has also crafted a working smartphone app that works in concert with their unique hardware over Bluetooth.

The team has dubbed their invention the “Stratus” and has positioned themselves as an economically viable option for musicians who want a flexible modular effects platform in a sleek and simple package.

“InNOLEvation was an amazing opportunity for us to grow as a team and company. We were excited to represent FSU PC and compete against other student-led startups in an academic setting,” said the CEO of Chaos Audio, Landon McCoy.

Chaos Audio plans to use its InNOLEvation prize winnings to accelerate their production efforts and bring Stratus to the public.

“We’re going to use the $10,000-dollar grand prize to fund our Bluetooth LE licensing fee and other tooling costs,” McCoy said. “We know this prize money will play a huge role in getting Stratus to market and we’ll forever be thankful to FSU and the Jim Moran College of Entrepreneurship for this opportunity.”

While winning this competition is cause for celebration, this is only the beginning for Chaos Audio who have enjoyed similar success in the past. Now the team is gearing up to relaunch their Kickstarter Crowdfunding campaign in April. If all goes well, they will have even more to celebrate in the near future.

To learn more about Chaos Audio and Stratus, visit their website here.