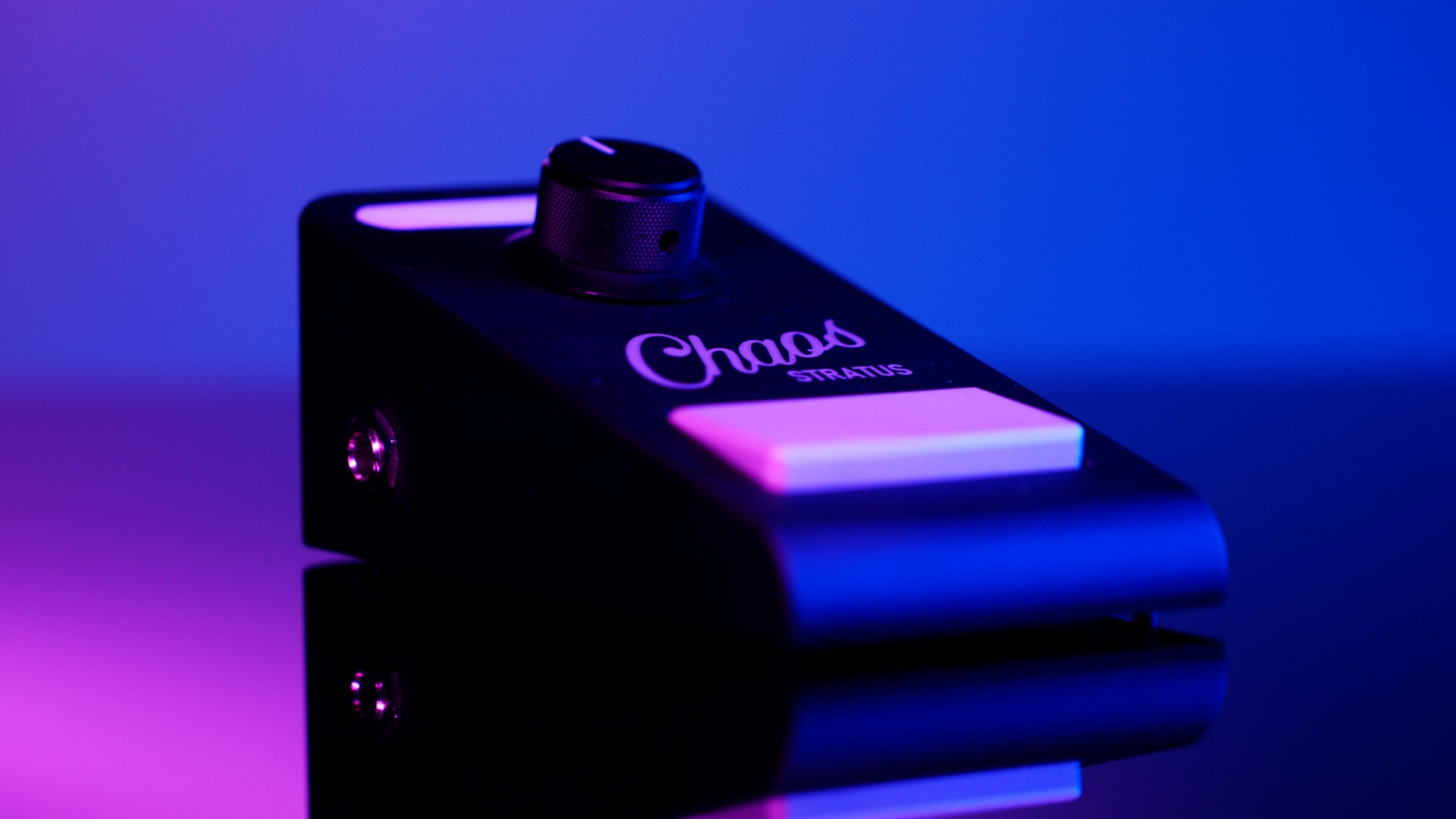 Imagine gaining access to a universe of audio possibilities with the press of just one switch. Soon that dream will be a reality with the introduction of Stratus by Chaos Audio, a smart guitar pedal that wirelessly connects to your phone or tablet via Bluetooth.

Stratus is planned to launch on Kickstarter November 1st after over a year of intense development by the dedicated team at Chaos Audio. The Chaos team is composed entirely of five young engineering students attending Florida State University here in Panama City, Florida. They are also one of the promising startups housed within our very own TechFarms incubator. The team has worked tirelessly to bring their product to market and this Kickstarter launch is the next big step toward that goal.

Referred to as a Swiss Army knife for guitarists, Stratus is Bluetooth enabled and combines a customizable digital pedalboard, guitar tuner, looper, metronome, and more. All these tools seamlessly interface with the user-friendly smartphone app and are controlled through the one-of-a-kind pedal. An array of cool sound effects will be available for download from both Apple and Google app stores.

“Stratus is the guitar pedal re-imagined,” said Landon McCoy, founder and CEO of Chaos Audio. “Think of it more as a computer than a stomp box. Stratus has all of the amenities guitarists have come to know and love from other smart devices including internal memory, rechargeable battery, USB type-C, Bluetooth 5.0, and an LED light strip with real-time functionality for the tuner and metronome.”

The Kickstarter needs to raise at least $25,000 by the end of November to be successful. Landon and the team at Chaos believe that once people get to witness their creation in action the backers will come flooding in.

“Stratus is still early in development,” McCoy said, “but it already has so much potential. We can’t wait to show you everything we have planned for the future.”

The origin of Chaos

Landon McCoy unwittingly chose the perfect name for his company one summer night on the way home from a rock concert. At the time he had no way of knowing that the near future would be complete chaos in every conceivable definition of the word. Out of a sheer passion for music and audio technology, Chaos Audio was born.

McCoy said the idea for a game-changing guitar pedal came soon after with the idea to stuff a bunch of tools into one unassuming package. From that rudimentary premise, Stratus began to take shape.

“I knew that if I wanted to make this idea a reality, I would need a team,” McCoy recalled. “Luckily, I knew a few guys.”

Landon enlisted the aid of his long-time friends Aubrey Champagne and Robert Copsey to begin working on the project. Soon after Robert brought in Cameron Jones who had a knack for mechanical engineering and finance. With Aubrey focusing on software development, Robert working on the manufacturing, and Cameron keeping everything organized, Landon had assembled his team.

The group of twenty-somethings quickly slapped together an early prototype for their invention and entered it into a competition hosted by the University of West Florida which they promptly won. Click here to read more about that story.

“We used the success of that competition to launch us into the next phase of development,” McCoy said. “It wasn’t long before we partnered with TechFarms and got to work on a better prototype.”

Having received a grant and free admission to the TechFarms incubator, Team Chaos quickly got to work refining their pedal. Click here to if you want to read more about how Chaos began working with TechFarms. Soon after, they enlisted the help of Armis Sunday, another engineering student, to help market the product.

With all the pieces of the puzzle in place, Chaos Audio had a disruptive product and a team to support it. The next step was to get more funding for the project by launching it on Kickstarter. Landon and the team knew that the most important part of the Kickstarter was the launch video, which is why they hired a production company out of Tallahassee to do a professional video shoot. They enlisted the aid of Daniel Donato, a successful musician and early supporter of the company, from Nashville Tennessee, to help promote Stratus in the video.

“I’m always looking for ways to incorporate new technologies into the way I create and perform music,” Donato said during the shoot. “Stratus is right on the edge of that.”

Chaos is reportedly very pleased with how the video turned out and is excited to present it via Kickstarter in November.

“Everything is falling into place and it’s working out better than I could have imagined,” said McCoy. “Stratus will be coming very soon at this rate.”

What does the future hold?

Stratus is a powerful musical tool, but it is still developing, and its potential is nearly limitless. Chaos plans to provide continuous updates to the pedal and app long after launch as well as create new peripherals and add-ons to modulate user experiences.

“We have a lot of ideas we want to try,” McCoy said. “Bluetooth opens up a world of possibilities for modular controllers.”

One idea the team has is to make a Bluetooth switchboard that interfaces with the Stratus and app to allow you to easily change between different effects in your chain without having to rely on your phone or tablet.

“Chaos is constantly evolving,” he said. “We want to keep improving our products and change the landscape of music technology.”

McCoy is very keen on patenting his ideas and designs. The pedal itself is unlike anything else on the market and Chaos hopes that its unique design that feels both modern and vintage at the same time will speak to every musician who lays eyes on it.

If the Kickstarter is successful, Chaos plans to have production live by September 2021. If you are interested in learning more about Stratus, Chaos Audio, or the November Kickstarter campaign, please visit https://chaosaudio.com/